At the 2022 residencies of Breachacha Embrace we wish to explore alternative models of society, based on feminine principles of participation, compassion, resilience and relation. In togetherness with artists, ecologists, and writers, we research, write, and create in the quietude of the natural environment of a remote island. Embrace: Space provides a place for respite and recovery from stress caused by systemic professional pressures in a rapidly changing world, and an opportunity for new insights through immersion in nature and in conversation among peers. All focus is on developing the project as well as engaging with the other residents in theoretical debate through discussions and presentations. An island allows for such an opportunity of exploration of the small and the sustainable.

For centuries women have withdrawn to islands to create a counter current to patriarchal power and control, be it literally off the coast of Europe to escape Roman soldiers, Christian monks, Viking warriors…, or metaphorically by inhabiting a walled Beguinage or Stift. The island-led female independence and wisdom have always been overlooked, even hidden, but empower us to rethink these impulses in the contemporary. This is history but also a story of the present-day. And because of it our aim is to research the possibility of using the island’s gifts of nature to start up a manufactory of caring space-time with attention to the wildflowers, seaweed, and sheep’s wool. These steps are in significant part inspired and realized in response to the singular magic of this Hebridean island. 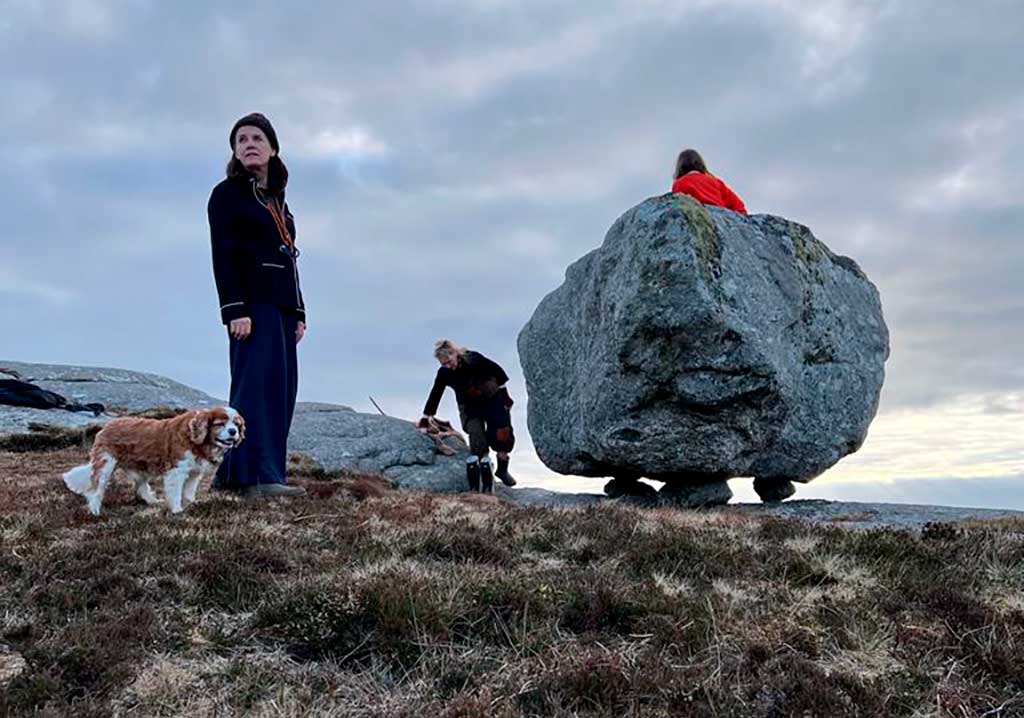 During her residency at Breachacha Castle Alice Albinia will be writing her fourth book, The Britannias, a cultural history of Britain through its islands which is also the culmination of seven years of literary and cultural exegesis of Britain’s lost feminist histories and stories. The Britannias will be published by Penguin (Allen Lane) in January 2023 and is the non-fiction twin of her novel Cwen forming a choric palimpsest of female poetry, stories and power.

For several years, Ulrika Sparre has been researching places and stones that are considered by local communities to emit energy and to possess intrinsic powers for humanity. With her ongoing project Ear to the Ground the artist seeks to challenge the perception that there is a “nature” that exists apart from us. To face the threat of climate change, we must give voice to non-human elements, such as stones and glaciers. In this way, Sparre wants to investigate how our relationship with what we consider nature can be reevaluated by giving it a possible language. Perhaps by repositioning our perspective we can give rights to our environment. On the Isle of Coll, Sparre wants to study the boulder called The Queen’s Stone on the top of Ben Hogh.

With support by
The Swedish Arts Grants Committee

SEE ALL THIS (Art Magazine)

They have chosen to partner with Embrace: Space at Breachacha Castle in the Isle of Coll because of a sense of ‘quintessence,’ the fifth element in ancient Greek philosophy. In Latin, quinta essentia, literally the fifth being, is an immaterial element that, according to Aristotle, permeated the whole world. And that essence is tangible on this edge of the earth on a wild shore of the Atlantic Ocean. To succeed in rethinking a social model in which economy and ecology thrive alongside each other, a generous network is essential. And an island has this. It depends on the islanders’ solidarity and imagination.
FINTRO PRIZE SUPPORTING YOUNG ARTISTS

The prize is specifically aimed at young artists and performers between the ages of 18 and 32 in the following categories: Literature, Film, Theater and Dance and Painting, Sculpture and Photography.

Following on the publication of Colour Fields, See All This #24, the art magazine will bring magazine members to Breachacha Castle during the month of June. Breachacha in Gaelic means ‘Field specked with wildflowers / Colour Field.’ (See also Ida Grae with her book Nature’s Colours)

With issue #24 in mind, we attend to a new movement that is evolving: Artivism. And Claudy Jongstra is one of the pioneers. Her art is a standard-bearer, to be given a political voice and ensure social cohesion, as it is an alarm bell and a cry for more biodiversity and rewilding.

‘Rewilding is a narrative of hope,’ says Richard Bunting, because it gives us perspective and purpose. It doesn’t just preach doomsday scenarios or a narrative of abstinence and deprivation, but it gives us something in return: the promise of a wilder world, a more exciting life, a better connection with our environment. Rewilding is about strengthening the local connections between nature and community.

According to Nicole Ex, the way in which Jongstra expresses herself in her work—the weaving and felting of wool into tactile landscapes—appears to be the foundation of the artist’s entire biotope: she weaves and felts as though linking everything and everyone together into a tangle. Her textile work is mostly involved with the biodiversity of wildflowers. Together we are exploring the idea of creating a small manufactory on the Isle of Coll, to work with the wildflower fields, the herbs, and perhaps the wool of the sheep that roam on the island. Can Breachacha become the space of an experimental lab?